Dick Parkinson and the Founding of JCI Kelowna

About 4,500 people lived in Kelowna at the onset of the 1930s. This was the smallest and least vibrant of the three valley communities, the other two being Penticton and Vernon. Kelowna was the last to be connected to a railway, the two sawmills manufactured many thousands of wooden boxes used to ship the valley’s abundant fruits and vegetables around the world, and Kelowna General Hospital was in the same location it is today, but it was a long way out of town in those early years.

Dick Parkinson was a child when he arrived in Kelowna in 1906 with his family from the wild mining town of Fairview, in the mountains above Osoyoos. His father departed to fight in WWI and never returned. Dick became a surveyor, mapping out the subdivisions and planning the irrigation projects that were so essential to the area’s expanding orchard and tobacco industries.  He also played, coached and organized basketball, baseball, and lacrosse throughout the valley, and volunteered for the local fire brigade. 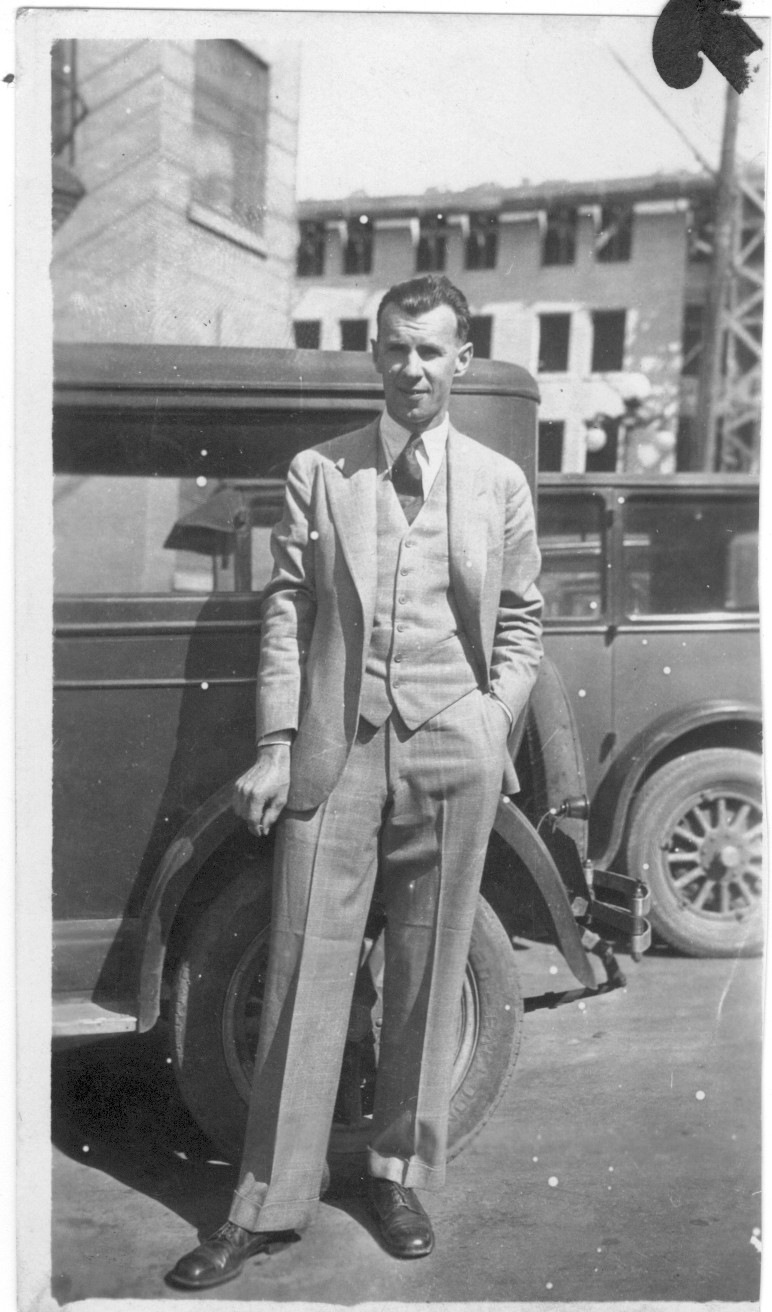 By 1936, midway through the Great Depression, an impatient Dick knew more needed to be done and created the Kelowna Junior Board of Trade – the forerunner of the Jaycees, and today’s JCI Kelowna  - because, he said: “I started it as a protest because I thought the older businessmen in town weren’t doing anything. One of our early projects was house numbering and making maps of city streets. We encouraged sports and constantly nagged the city council for more playing fields and more parks.”

The group also tackled one of the biggest issues at the time: Getting across Okanagan Lake. Paddlewheelers had been transporting people and freight between Penticton and Vernon for years, but this was a long lake and Kelowna, being at the narrowest point, was the most logical place to get across. For a few years, a tug and scow had carried a few cars and passengers, though cattle and horses still had to swim. The government eventually provided a ferry, the MV Westbank-Kelowna which carried 15 cars, but service was unreliable and irregular, and long lines of waiting vehicles often blocked Bernard Avenue. People were mad and businesses suffered.

The community – including the Junior Board of Trade - decided to take matters into their own hands: They would build a road to the south, along the east side of the Okanagan Lake to Penticton, and call it the Naramata Road. It was to be  built by volunteers working on Thursday afternoons and Sundays, though most had little construction experience and weren’t used to heavy physical labour. It didn’t matter - they were very clear about the need to make Kelowna more accessible. Ignoring the realities of this crazy project, they hacked their way across mountains and through swamps and canyons with little more than picks and shovels. Women enthusiastically supported their efforts by showing up with tea and coffee.

Dick Parkinson declared: “our aim was to shame the government into doing something.” Volunteers worked on the project for the next two years, weather permitting, but in May 1939, a new provincial vehicle ferry, the MV Pendozi, was launched. The community thought their problems had been solved. WWII was declared soon after, the road-building volunteers enlisted, and enthusiasm for the project vanished.

Dick also went off to war but was too old to be sent overseas and returned to Kelowna to pick up where he left off. Then become a city councillor and then mayor between 1948 and 1959. 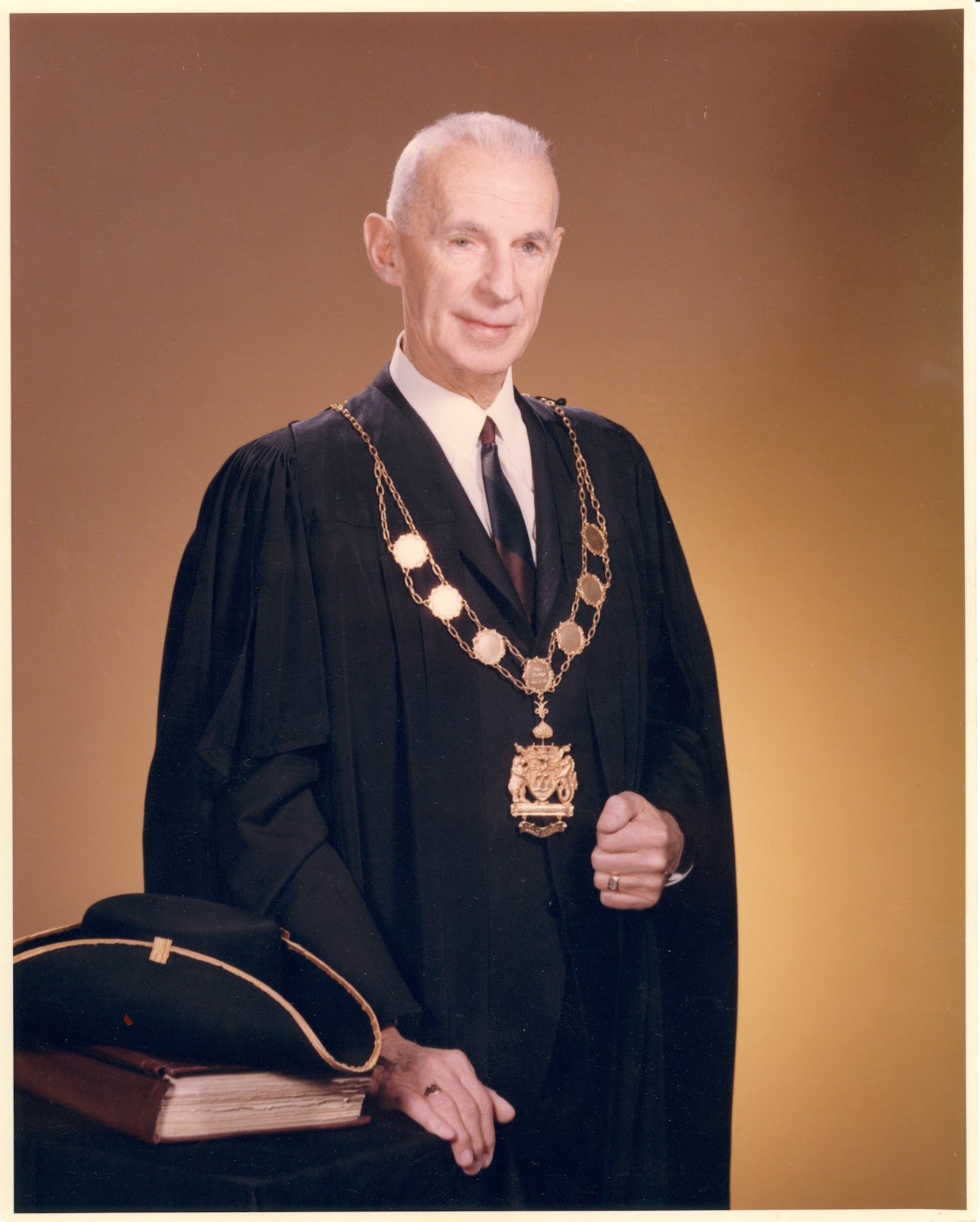 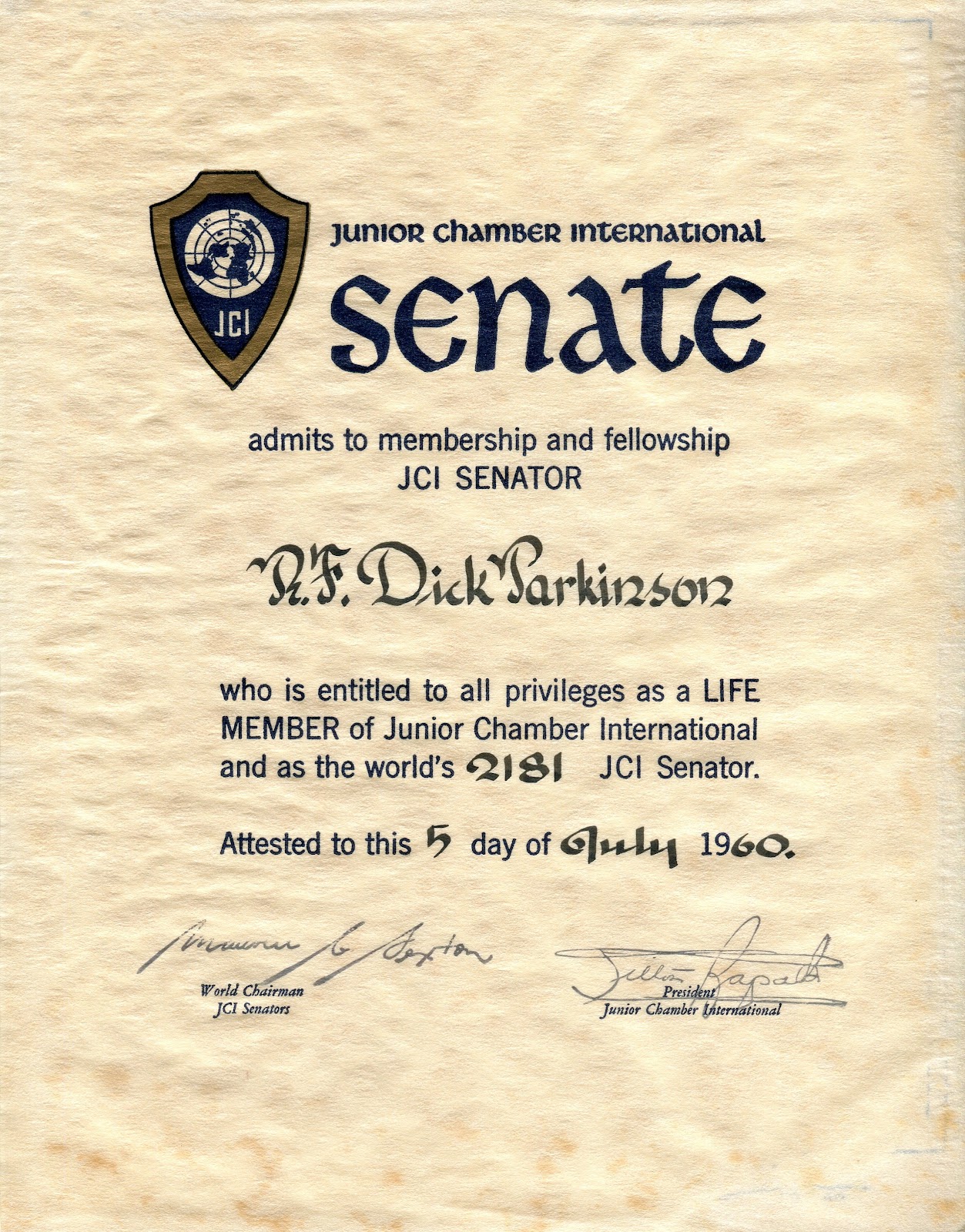 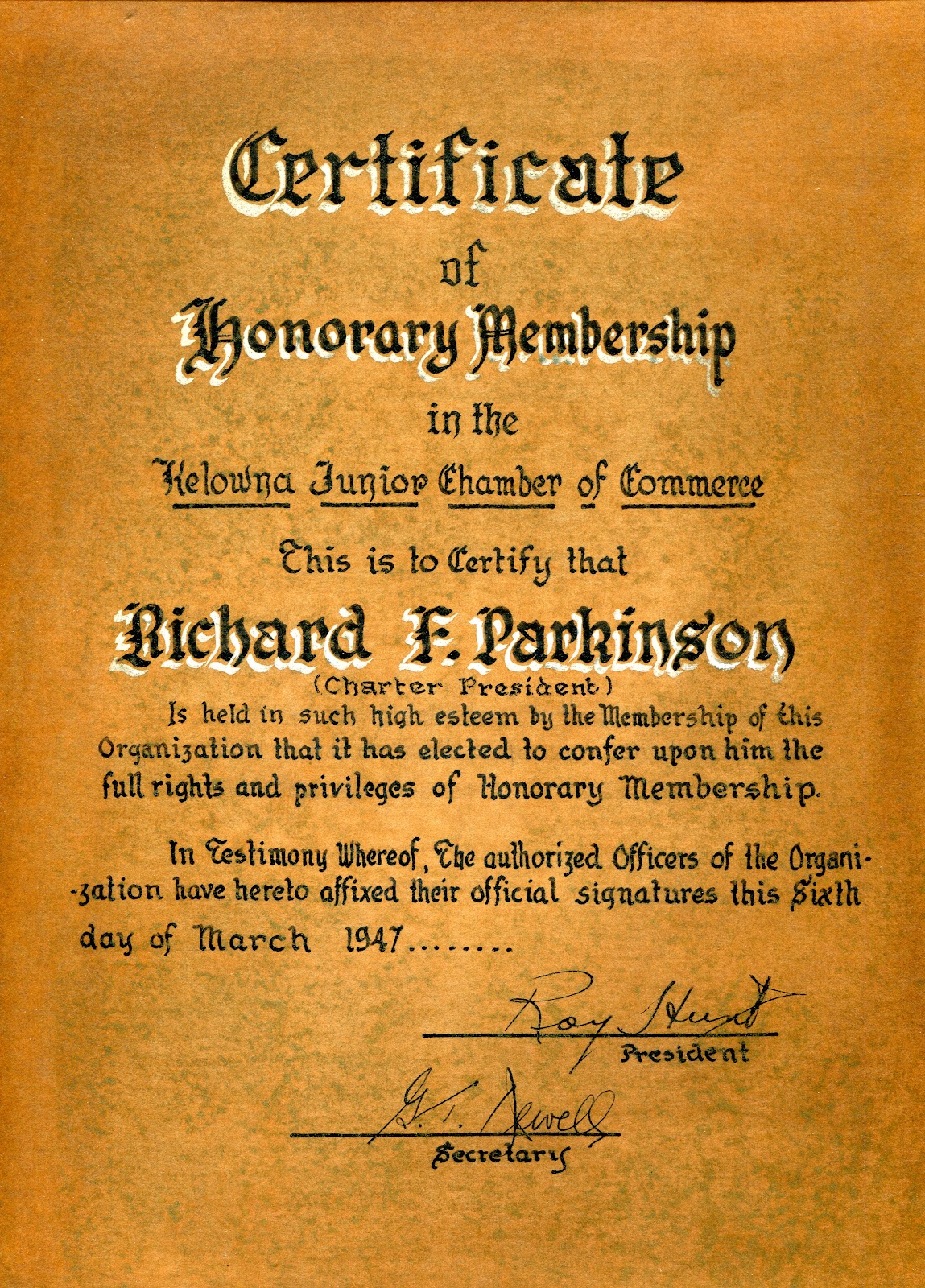 He was an enthusiastic organizer of the Kelowna International Regatta during the late 40s and 50s when thousands arrived in town to party, compete in swimming and diving events in the open-air pool as 5,000 spectators watched from the 5,000 seat City Park Grandstand.  Kelowna’s International Regatta was the highlight of each summer for many years and Dick was its greatest promoter and ambassador.

When the grandstand burned down in 1969, Regatta lost its focus and in spite of much controversy, the insurance money was used to build the Parkinson Recreation Centre. That building is now dated, and planning is underway to replace it. Will they keep the Parkinson name?

Dick had three priorities when he became Mayor: One was to expand the city boundaries, which he lived to see when this was legislated into being in 1973. Secondly, he wanted Kelowna to have a convention centre, an issue the city continues to grapple with. Thirdly, he wanted Kelowna to have its own airport. Though the land was purchased in 1946, commercial flights were then in their infancy and regular service didn’t arrive in Kelowna until the mid-'50s. Dick would be amazed to see today’s passenger numbers and the array of destinations, though that’s what he likely had in mind from the beginning.

Kelowna was the late bloomer among the three valley communities, but Dick Parkinson’s leadership made his vision of a greater, more engaged community a reality. He was an outstanding leader during his lifetime, but also a role model for today – if he saw something that would make his community a better place, he led, organized, motivated and engaged like-minded citizens to ensure their collective vision became a reality.  His is a great legacy. 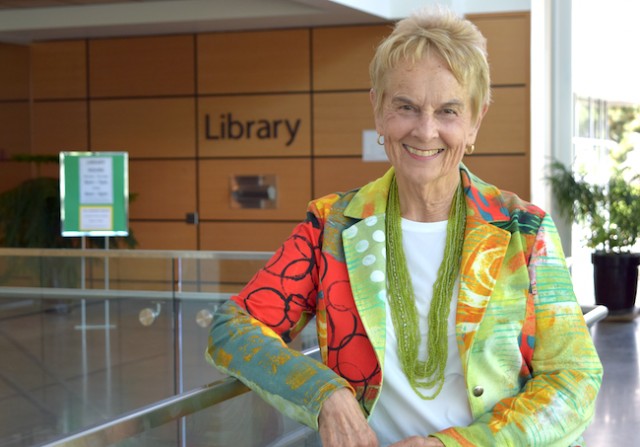 Sharron Simpson is a community historian and author of several books, including the definitive history of the area, The Kelowna Story: An Okanagan History which is available at local bookstores.

For a quick view of our events calendar, click here.

Mission Statement
"To contribute to the advancement of the Kelowna area by providing young active citizens with development opportunities in leadership, social responsibility, entrepreneurship, and fellowship necessary to affect positive change and influence in our community of Kelowna, BC."

Who are we?
JCI Kelowna is a group of young professionals and entrepreneurs, ages 18-40, that strive to grow as...